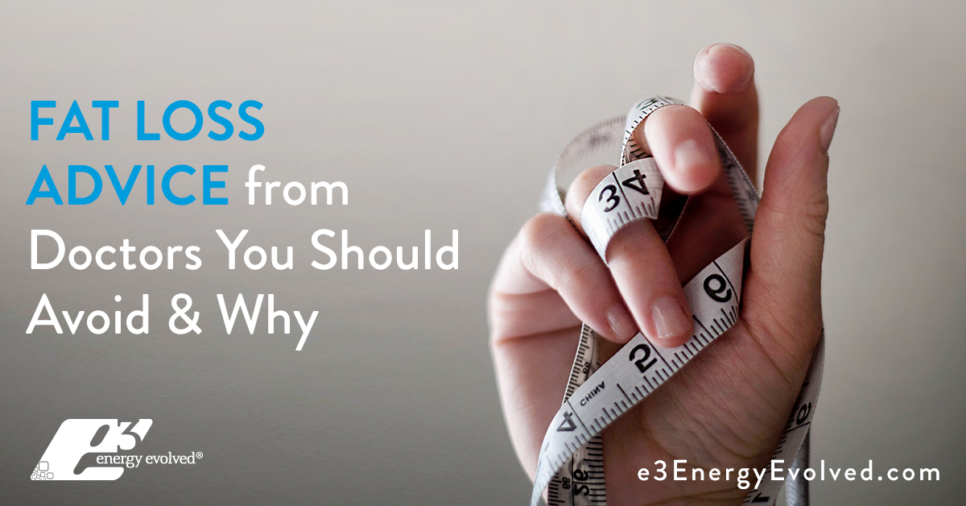 While eating breakfast the other morning, I was watching the local Fox morning show. They regularly feature a doctor from the Fox Medical Team, providing their viewers with “medical research” and “recommendations.” Because it was the first Monday of the new year, the topic was “New Year’s Resolutions,” and how to lose weight post-holiday.

The featured doctor started by saying that diets don’t work. I thought ok, this is a statement I strongly agree with, yes….diets don’t work and diets are complicated, but I will go into more on this later. Next, he then followed by saying, “All you need to do is to change your lifestyle; it’s that simple.” This recommendation I will partly agree with, as for many, a lifestyle change is very necessary. However, he never defined “a lifestyle change.” What is it about your lifestyle that needs to change? There is a lot that goes into this, more on this in a bit too.

“Eat less… exercise more…” A weight loss recommendation made all too often by fitness professionals, nutritionists, and yes, doctors. I’ve lost count of the number of Functional Health Assessments I’ve been on where the woman on the other end of the phone, who’s been struggling with adrenal and thyroid disorders, chronic fatigue and unexplained weight gain, have been advised by their doctors to eat less and exercise more. We’ll come back to this in a moment.

Meals should not only be nourishing and healing but should be enjoyable at the same time. Grilled tilapia and steamed asparagus is not only boring, but also depriving of nutrients and pleasure, and is a set-up for failure.

Does this sound familiar? You’ve dieted year after year, then one January, your husband decides to share your misery and diet along with you. You’re eating the same food and relatively same portion sizes, and your husband loses 15 pounds in the first two weeks while you’ve lost zero. “How can that be?” you ask. It’s because every time you yo-yo diet, you’re resetting your metabolic set point, lower and lower.

There was a study performed several years ago, taking a group of people who yo-yo dieted for 20 years straight, while measuring their metabolic rate before, during and after that 20-year period. They found that those individuals’ metabolisms were at an entirely different spot after the study than 20-years before.

I bet no one has ever shared that with you before when suggesting or selling the next “fad” diet. It is one of the biggest elements to take into consideration.

Though a lifestyle change is likely a great suggestion, what does it mean to change your lifestyle? If you plop your behind on the couch and eat potato chips and donuts all day long, or hit the drive-thru at McDonald’s every day, then sure, putting down the bag of chips and getting off the couch to get some movement, or coming home from work and cooking a nutritious meal would be great lifestyle change to make, but we need to think a bit deeper. Diets are more than just that.

What about your stress? Doing a better job of managing stress may be a great “lifestyle” change. Meditation, praying and yoga can be very helpful in this arena. If you’re overly stressed, there are biochemical changes that occur within your body that will negatively impact not only your metabolism but also cause cravings for less than healthful food.

What time do typically go to bed? Are you one of the majority in the United States that goes to bed after midnight? If so, that will undoubtedly impair your adrenals’ ability to recharge and your liver’s ability to detoxify, both of which will cause metabolic chaos.

Are you staring at your iPhone or tablet device up until bedtime? Here’s another habit that will affect your quality of sleep and your metabolism. These are just a few lifestyle changes it’d be a good idea to make.

If you haven’t picked this up as of yet, this recommendation drives me batty for a number of reasons. I regularly talk with women who’ve been doing HIIT training, long distance running, CrossFit, etc., while eating 1,200 calories per day, yet wonder why they’re not losing weight. And this advisement is coming directly from their trainers and doctors.

Increase your exercise intensity, but eat less food… how do you expect to sustain that level of activity? It’s complete nonsense. What happens, maybe not immediately, but over a short period, you will lower your metabolism, or worse, create health problems like thyroid disease or chronic fatigue.

Dr. Levine from the Mayo Clinic, over an eight-week period, studied a group of individuals who were fed 56,000 calories over their BMR (Basal Metabolic Rate) during that time period. According to the “calories in, calories out” methodology, each of those people should have gained 16 pounds during that eight-week period. On the contrary, though there were a few individuals that gained as much as eight pounds, the majority of the participants didn’t gain a pound.

It’s not about eating less and exercising more. In our practice, we regularly remove exercise from our client’s lives, while having them eat more than they’ve ever eaten before, more of what their bodies are in need of at this given point in time, and they lose weight, some losing 30-40 pounds in just a few months.

We have an expression, “You’re not sick because you’re fat, you’re fat because you’re sick.” If you’re unwell on the inside, your body doesn’t care that you want to lose weight. Its biggest concern is to keep you alive and get you healthy again. Once you do the things necessary to restore your body back to homeostasis, the body fat will shed itself, with minimal effort. In many cases, that’s focusing less on exercising and more on resting, while eating the right, nutritious foods your body is craving, not the foods your mind tricks you into thinking you’re craving. It’s that simple, yet that complicated at the same time.

If you’re one of the many who has tried the diets and intense exercise, to no avail, and are sick and tired of being sick and tired, we’d love to hear from you! Take action and set your New Year off on the RIGHT foot. If you are ready for the support, contact our team today. Our Functional Health Assessment is held by a two-practitioner team whom both attend your 1-hour session.

We encourage you to step up and take control of your life, body, and health. God only gives us one life and body as his greatest gift of all – it’s time to live your life to your fullest ability of health, joy, and love.