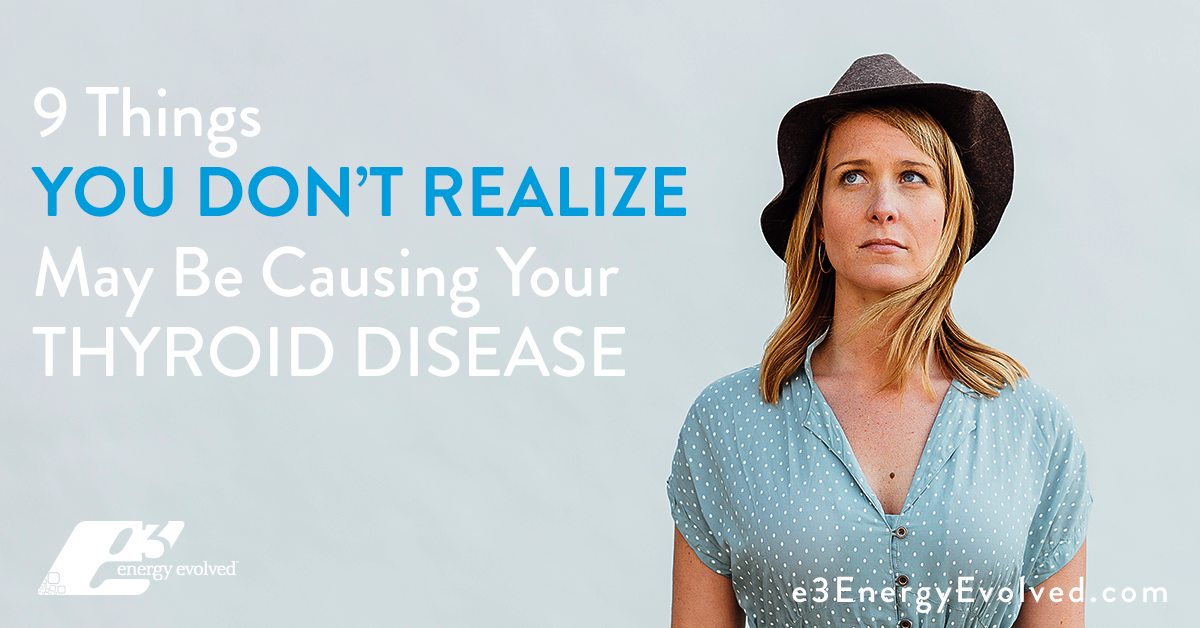 An estimated 27 million Americans alone have thyroid disease.  An additional 13 million are undiagnosed or misdiagnosed, and those numbers are on the rise.  Chances are, one out of five people you know have some sort of thyroid disease, are you one of them?

The thyroid is a butterfly shaped gland sitting just above the trachea in the throat.  Three of the major hormones it secretes are Thyroxine (T4), Triiodothyronine (T3) and Calcitonin.  Aside from vitamin D, the thyroid hormones are the only hormones in the body that affect every cell in the body.  It’s no wonder why under or overproduction of its hormones lend to so many symptoms, including weight gain/decreased metabolism, fatigue/insomnia, elevated cholesterol, intolerance to cold, poor concentration/mental fog, digestive issues, constipation, infertility, aches & pains, and much more.

In the modern world you live in, there are so many factors that could not only negatively influence your thyroid’s ability to function properly, but also affect how your cells utilize its hormones.  Some of these influencers can actually create additional issues which further influence function, creating somewhat of a snowball effect.  Below are some of the factors that affect the thyroid’s ability to perform as intended.

There are several nutrients that are necessary for the thyroid gland to function.  The minerals iodine, selenium, chromium and zinc, as well as tyrosine (an amino acid) are required for T4 production.  Selenium and zinc are also required for the conversion of T4 to the more active hormone, T3. If any of these nutrients are depleted, the thyroid will not function properly.

There are many factors that can cause any or all of these nutrients to be depleted.  First and foremost, a diet high in processed or refined foods is these nutrients because they’re destroyed in the refining process.  Also, eating conventionally grown fruits & veggies are missing many of these nutrients.

Studies have shown that conventionally grown produce contains less than half the nutrient quantity of organically grown produce.  In addition, genetically modified crops (GMO’s) contain chelating agents that leach to the minerals making them unable to be absorbed when ingested.  So, even if you’re eating a bunch of fresh fruits and veggies, if they’re not organic, you may not even be obtaining the nutrients that otherwise should be inherently available.

In addition, all medications prescribed by your doctor deplete the body of certain vitamins and minerals.  So, if you’re like most Americans who are taking medications, prescription or OTC, they may be causing nutrient deficiencies, and our bodies run on nutrients, not drugs.  Aside from medications, there are many other toxins in our homes and environment that also use up these nutrients, which will be discussed shortly.

Not to be mistaken by food allergies, food sensitivities can have a huge impact on thyroid function.  When your immune system is compromised (if you’re having a thyroid problem, it likely is), the mucosal lining of the intestinal tract can become overly permeable, allowing partially undigested food particles to seep through into the blood.

Eating certain foods, whether “healthy” or not, can trigger an immune response, where the immune system will begin to attack those undigested amino acid strands. This can not only create further permeability, but also overwhelm the liver and use up many the nutrients needed for thyroid function like glutathione and selenium.

The immune system has a fantastic memory, so it remembers those undigested amino strands, which can resemble proteins elsewhere in the body, like the thyroid.  Then, the immune system may begin attacking the thyroid gland, causing autoimmune hypothyroid or Hashimoto’s.

Eating certain foods, whether “healthy” or not, can trigger an immune response. #thyroid #metabolism

To piggyback off what was mentioned about food sensitivities, intestinal health can influence thyroid function in several ways. Aside from an overly permeable intestinal lining, a compromised immune system can also prevent the body from properly dealing with parasites, bacteria or fungus.  These pathogens emit toxins that cause further dysbiosis (imbalance in friendly bacteria) and further intestinal permeability.

An example is yeast.  When a dysbiosis is present, yeast can build up within the intestines.  Yeast emits very toxic compounds called exotoxins.  These exotoxins not only feed the bad bacteria like e. coli or enterobacter, but can also bind with cell receptor sites, making them think they’ve bound to a hormone (hormone masking).

When we think of enzymes, we most often think of those necessary to break down food, like lipase, protease and amylase, but enzymes are catalysts in almost every metabolic pathway in the body.  Within the cells, enzymes bind with substrates, initiating changes in cellular metabolism.

Aside from assisting in the breakdown of food particles for proper absorption, enzymes also regulate cellular respiration, converting broken down food into molecules to be used as energy by the cells.  Enzymes are also required for the conversion of EFA’s to prostaglandins and act as messengers to help deliver hormones to the target cells.

Unfortunately, enzymes can be easily destroyed by different toxic substances; like heavy metals, drugs, household chemicals, personal hygiene products, pesticides, etc. Once destroyed or denatured, they cannot deliver the hormone “messages” to the cells, yet another reason why your thyroid panel may appear “normal”, but you still feel like garbage.

Iodothyronine deiodinase assists in the conversion of T4 to T3, and is very susceptible to destruction by mercury.  Are you one of every two Americans who have amalgam dental fillings, use mercury containing eye drops, or have been bombarded with different mercury containing “preventative” modalities?  If so, then this could partly be the reason for low T3 levels.

Well, we can’t leave out thyroid peroxidase, which is also affected by heavy metals; may also partly explain your Hashimoto’s disease.

When that stress becomes chronic, and excess cortisol is produced, it depletes tyrosine levels, making it unavailable to the thyroid gland for production of its hormones.  Elevated cortisol also inhibits the conversion of T4 to T3.

Increased ACTH production also prevents the pituitary from releasing TSH.  In addition, chronic stress depletes chromium and zinc, both of which are needed for T4 production.

Above we discussed mercury’s effect on Iodothyronine deiodinase and TPO.  Aside from this, mercury also directly affects thyroid function at a glandular level by over-stimulating the thyroid then decreasing its uptake of iodine, interfering with the synthesis of the hormones themselves.

Contrary to what your dentist may have told you, if you have amalgam fillings, every time you chew, it mercury vapors to be released from the filling, which is extremely toxic to not only the lungs, but easily crosses the blood brain barrier and can be catastrophic to the nervous system.

Another myth told by the ADA is that fluoride is needed to prevent cavities; not true.  Fluoride is also an enzyme inhibitor, replacing iodine in the thyroid gland as well as calcium in the bones.  Here’s a thought, if fluoride displaces calcium in the bones, how can that lead to healthy teeth?
Fluoride also is a neurotoxin and decreases melatonin secretion.  Question, do you also have trouble sleeping?  This may be one of the factors.

Chlorine is another chemical added to our water supply (like fluoride), as well as white flour and other food products.  Chlorine is also an enzyme inhibitor and displaces iodine from the thyroid gland.

Bromine/bromide is another highly toxic chemical that displaces iodine from the thyroid gland.  Bromine is used in bread making, as it helps the bread to rise.  Ironically, iodine used to be used for that purpose, but our government thought that people might get too much iodine, so they passed a law requiring bakers to use bromine instead.

Most retail personal hygiene products are nothing more than chemical compositions that have catastrophic implications on your health, including your thyroid.  Whether it’s toothpaste/mouthwash, deodorant, shampoo/conditioner, perfume or even makeup, they’re all full of toxic chemicals that completely overwhelm the liver, are toxic to the nervous system and inhibit enzymes.

Many of them, like your contact lens solution and makeup you apply to your face contain mercury, which we’ve already addressed above.

All medications, whether it’s Aleve or Advil for your migraines and joint pain, Statins for your elevated cholesterol, birth control pills to regulate your cycle or act as a contraceptive, antacids for your indigestion, allergy meds or any other drug in your medicine cabinet, they’re all highly toxic, inhibit enzymes and deplete essential nutrients.

Oral contraceptives are one of the biggest offenders, yet most Ob GYN’s will use scare tactics to force you into using them, like “They prevent breast cancer.”  In fact, the opposite is true, research suggests that they lead to breast and other female cancers.  As if your body is birth control pill deficient.

Oral contraceptives also deplete many of your anti-stress vitamins like vitamins B2, 6 & 12, and vitamin C, as well as tyrosine and zinc, which as stated earlier, are necessary for thyroid function, as is vitamin B6, and magnesium.

Excess copper can be very inflammatory, affecting the joints, liver and even the thyroid.  Copper tends to build up in the thyroid gland, which can lead to a multitude of thyroid problems.

Copper is essential for the formation of the nervous system of a fetus.  Because an expecting mother’s need for copper is increased, most doctors prescribe prenatal vitamins that contain more than twice the copper of other multivitamins.  That sounds logical, right?

Here lies the problem.  When a woman becomes pregnant, her body’s ability to absorb copper also increases.  Adding additional copper to her multivitamin can cause toxic levels to be circulating through her system, causing increased oxidation and leading to a slue of health problems like emotional & mental illness, brain fog, allergies, pain and inflammation, fibroids, ovarian cysts, endometriosis, PCOS and amenorrhea, as well as liver and thyroid disorders and miscarriages.
If you’re using a copper IUD, you may want to reconsider.

What should I do?

As you can see from above, there are so many factors that can affect thyroid function, so the question is, “where should I start?”

You can start by incorporating some of the below.

Figuring out for sure what’s causing your thyroid disease requires a great deal of detective work. Because your cause(s) are likely different than someone else’s, a truly bio-individualized approach is usually needed.

Unfortunately, not many practitioners, natural or conventional, fully understand all the factors that affect thyroid function in order to effectively reverse a thyroid, autoimmune and metabolic health imbalance naturally.

These are just some of the things we teach through our E3 Energy Evolved System  to our private online e3 Restore Members, that most doctors and natural practitioners aren’t considering. Restoring thyroid, autoimmune and metabolic health naturally is a bio-individual journey for everyone, that involves multiple applied sciences including experienced human body change leadership utilizing functional nutrition, and integrative mind-body-spirit work.

If you’re in need of help, feel free to reach out to our team for information on how to schedule a Functional Nutrition & Metabolic Restoration Consultation + Labs Review.

We’ve personally & professionally corrected these health imbalances naturally, we’ve worked with 100’s of clients online, we accept a limited number of private e3 Restore Members each year during our open enrollment periods, and we would love to help you to restore your best thyroid, autoimmune and metabolic wellness to get your life back.

Our free guide is full of helpful information (and recipes!) that can get you started with healing your thyroid naturally. Download the guide here.