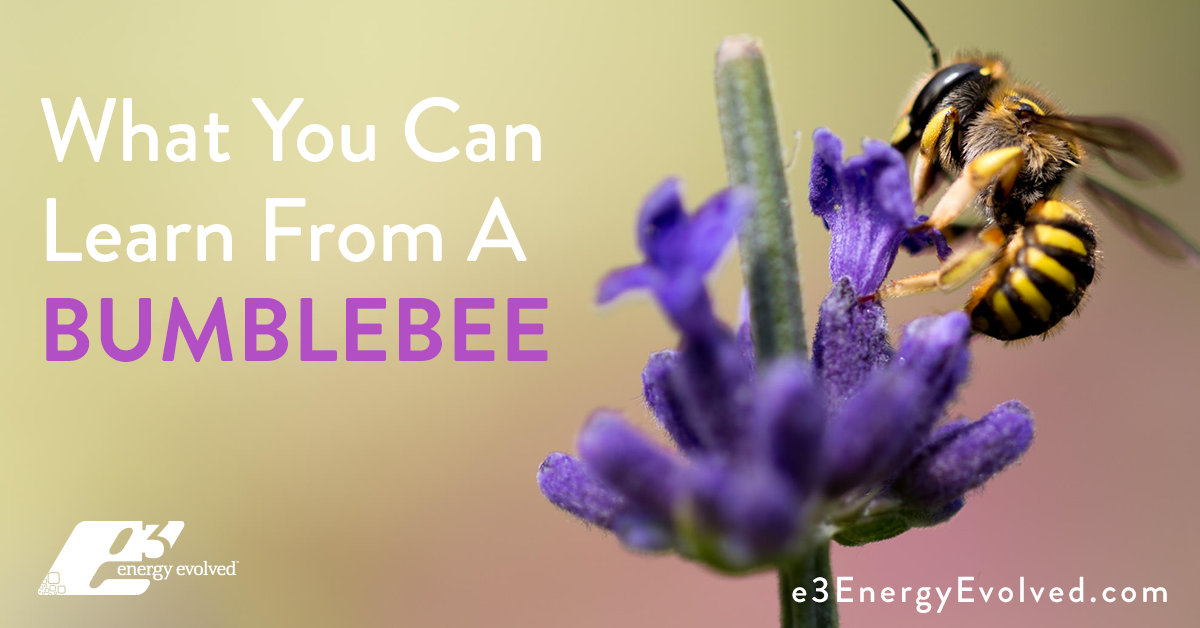 Spring time is well underway. With spring time comes flowers blooming, nicer weather, birds, butterflies and bees. It is one of my favorite seasons as new life blooms and beauty is brought to life and reminds me of God’s beautiful creation!

Around 25 years ago, I had heard that according to the laws of physics, bumblebees cannot fly, but because they’re unaware that they cannot fly, they actually DO fly.

Taking into consideration its body weight, wing span and speed at which it flaps its wings, it is physically impossible for the bumblebee to generate enough force to keep it in the air, according to a study by a French entomologist dating back to the 1930’s.

Bumblebees cannot fly, but because they’re unaware that they cannot fly, they actually DO fly.

Now I know you are thinking as I am, I’ve seen bumblebee fly my entire life! For that reason this notion has stuck with me for over two decades, and it’s something that has helped to shape my belief system.  Just because someone told me it was impossible, as long as I believed otherwise, I could make that impossibility a possibility.

If You Believe It, You Can Do It

This mind-set is part of what helped Heather and I beat her Hashimoto’s, autoimmune diseases and partial Lupus in our mid 30’s.  Even though dozens of doctors told her that she would have to live the rest of her life on drugs like Synthroid, we believed differently, and proved the medical system wrong.

Initially, we thought to ourselves, if a woman can create an entire new life from a couple of cells, in less than 10 months, how is it not possible to heal the body if given the proper tools. Guess what those tools are? Yup, those tools are nutrients.  This is what prompted us to both leave our careers, continue our education in functional and diagnostic nutrition, and create the e3 Energy Evolved mission.

This is what prompted us to both leave our careers! #e3EnergyEvolved #Restoration

Turns Out, a Bumblebee Can Fly

Last week as I was playing with the dogs, I saw a couple bumblebees flying around one of the shrubs in the back yard. I then thought to myself, why don’t I write a blog about the bumblebee defying the laws of physics, and bring that back to healing naturally.

So, before I started writing, I wanted to check my references to be certain that the study I was about to reference was a valid one.  As I gathered some research, I found that the study I had based this entire mindset on was a misconception.  A 1990 study disproved the 1930 study from 60 years ago.

As it turns out, if the bumblebees flapped its wings the way every other insect and bird flaps their wings, up and down or back and forth, it wouldn’t generate enough force to sustain its flight, but it doesn’t flap its wings like every other insect.

The Bumblebee Just Does It Differently

In 2005, a study was published in the journal Proceedings of the National Academy of Sciences explaining new findings about a bumblebee’s flight abilities.  Its wings flap similar to that of a helicopter propeller, creating hurricane-like vortices, helping it to stay aloft.

I then thought about my original point that if you believe that the impossible is possible, you can make it a possibility.  I do still hold that to be true in many cases.  However, when the doctors told Heather that she’d need to live the rest of her life on medications, and that she’d have to just “learn” to live with her Hashimoto’s and other autoimmune diseases, it didn’t mean that her natural recovery was impossible.  It just meant that using traditional medical methods wouldn’t provide the necessary tools to fully recover from her conditions.

If you believe that the impossible is possible, you can make it a possibility.

Everyday, we hear from women that were told by their doctors, both traditional as well as “natural”, that they needed to just live with their Hashimoto’s, hypothyroid, rheumatoid arthritis, Crohn’s disease, depression, etc.

We even see all these support groups on Facebook and elsewhere online keeping women brainwashed into thinking that their “dis-eases” are not curable.  This drives me crazy, as it’s not helping the cause, just holding people back from achieving better health.

The fact is, just because the way we’ve been taught to think a wing should flap is up and down, doesn’t mean it’s the only way to flap a wing.  And, just because the medical system’s methods cannot fully heal Hashimoto’s disease, it doesn’t mean there’s not another method out there that can fully heal Hashimoto’s disease.  It’s just that the medical system still hasn’t fully made the connection between nutrition, detoxification, and all other aspects of our e3 Energy Evolved System to optimal systemic function.

If you suffer from Hashimoto’s or any other health condition, and are being told that you’ll just have to live the rest of your life on medication, please understand that you don’t.  We were told the same thing, and we learned to realize that even though the medical model approach doesn’t fully work, there is another approach out there that will work.  The proof is in the results we created for Heather, and have replicated over and over with our e3 Energy Evolved members who were initially told the same thing. Ready to take that next step… schedule your consult today. Take the leap and flap your wings a different way.