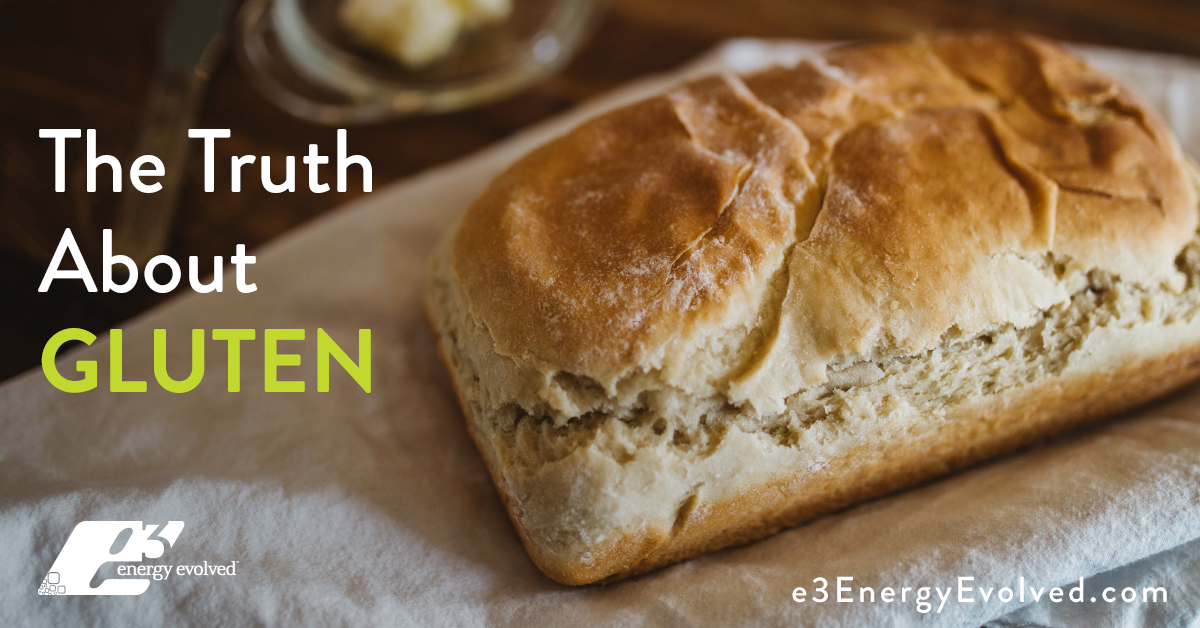 Having grown up in an Italian family in North Jersey, nothing could compare to the smell and taste of the fresh Italian bread baking in Mom’s oven. (Well, maybe the sauce to dip it in, but that’s a different story). I remember many Sunday mornings taking a short drive with my father to the bagel store to pick up a dozen freshly baked bagels. I mean, they were considered a “healthy” food back then. I also remember before a wrestling match, going to the Italian deli to pick up an Italian sub, about a pound and a half of cured meat on an entire loaf of Italian bread – the kind that was like a brick on top, cutting the roof of our mouth with every bite. My poor parents, every other week making another trip to the orthodontist to refasten the brackets I busted on my braces.

Little did I know that those baked goods would potentially wreak havoc on almost every system of my body. The culprit? Gluten.

Gluten is the protein found in many grains, such as wheat, barley, and rye. It’s what helps the bread and cookie dough stick together, and what makes Elmer’s glue fasten one piece of construction paper to another. (I also remember eating paste in kindergarten for my nice, daily dose of gluten).

Each of these grains is a hybrid of wild grasses that were present 15,000 years ago. At some point, farmers figured out how to hybrid those grass seeds to make grains that were more consistent, larger and more drought-tolerant; hence, the creation of wheat, barley, rye, spelt, and others. That hybridization not only changed the size and hydration requirements of the grain, but it also altered the protein structure.

A protein is basically a chain of hundreds or thousands of amino acids held together by sulfur. When the protein is ingested, it’s broken down into smaller pieces by an enzyme called protease, and further broken down into single amino acids by peptidases before they enter your blood stream. Unfortunately, because the digestive systems of people from many regions of the world haven’t fully adapted, they lack a certain peptidase needed to completely break down gluten, leading to gluten induced mal-absorption issues (Celiac Disease), or at the very least, gluten intolerance.

Some of the symptoms highly correlated with gluten intolerance are:

These strings of amino acids, or peptides, that haven’t fully been broken down can somewhat resemble a virus. The immune system is then alerted that there’s a foreign invasion, so it sends out its anti-bodies to attack the “virus.” The problem is, the immune system is looking for a particular virus, which isn’t even present, so it begins to attack other tissues – typically in the gut, but not limited to the gut. It can attack different tissues in different people, which is why it’s so difficult to pin people’s health complaints on a grain they ate but couldn’t digest.

Anti-bodies are sent to attack the “virus” when the immune system detects gluten.

Some of the tissue being attacked by the immune system is the internal lining of the gut. That lining in turn can become compromised, causing over-permeability, allowing larger particles like toxins, bacteria and immune complexes to pass through the intestinal walls and enter the blood stream (leaky gut), causing systemic inflammation and the inability to absorb nutrients leading to nutrient deficiencies.

It doesn’t end with the gut, however. Sometimes, those peptides that aren’t fully broken down can resemble opium, which can mimic endorphins, which our bodies naturally produce during times of stress or injury. This was discovered when opioid-like peptides were found in the urine of individuals suffering from autism and schizophrenia. This also explains the severe withdrawal symptoms many experience when they first eliminate all gluten from their diets; headaches, fatigue, irritability, etc.

Many experience withdrawal symptoms when first eliminating gluten from their diets.

Also, because undigested gluten can, so-to-speak, rip apart the gut, it allows toxins to enter the blood, which the liver then has to metabolize and dispose of. That can overwhelm the liver, preventing it from removing other toxins from the body.

Because gluten intolerance can cause an autoimmune response, the immune system can begin to attack itself, compromising its function and leaving the body vulnerable to other potential invasions like those from parasites, bacteria, fungus, and other pathogens, which are further fed by the starches in the grain, which can cascade into other malfunctions.

The stress of everything mentioned above can cause the endocrine system to also become overwhelmed. This can further lead to adrenal, thyroid and other hormonal imbalances – and it seems like almost everybody is experiencing now a days.

What Happens When You Remove Gluten From Your Diet?

Remove from your diet anything that contains gluten for at least 30 days. See if you notice any positive changes in how you feel. As mentioned earlier, gluten can have an opiate effect, so gradual elimination may be preferential if you do experience withdrawal symptoms. That includes most grains, and almost all packaged foods, like pasta, cereals, soy sauce, ketchup, most commercial soups and sauces, processed meats and meat substitutes, MSG, instant coffee, hydrolyzed veggie protein, many alcoholic beverages.

Even though removing gluten from the diet is a step in the right direction, it may not be enough, depending on the damage that the gluten has already done on the body over the years. Correcting those issues like thyroid and adrenal imbalances, digestive issues, skin, hair, and nail issues will likely take more than just not eating gluten.

e3 Energy Evolved focuses on finding the underlying malfunctions and correcting them through our comprehensive and potent energy restoration system.