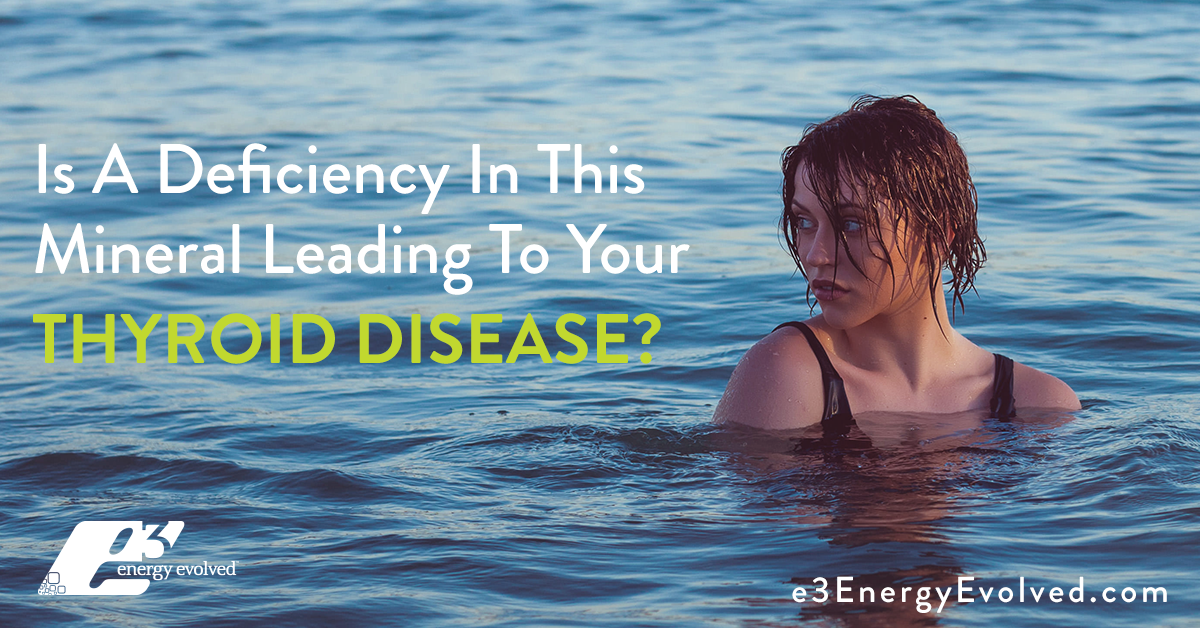 Do you suffer from hypothyroidism? What about fatigue, depression, anxiety, irritability, cold hands and feet, unexplained weight gain, hypoglycemia or infertility?  If you answered yes, you’re one of hundreds of millions of people that do, and a deficiency in iodine might be the reason.

Iodine is a slightly acid forming mineral, sometimes referred to as the “thyroid” mineral.  Although 80% of your dietary iodine intake is used by the thyroid gland, every cell in the body uses iodine to some extent, in particular the gastric mucosa, ovaries, mammary glands, salivary glands and many others.

The thyroid gland’s main function is to regulate your body’s metabolism.  Because all cells require thyroid hormones for proper functioning, a poorly functioning thyroid can have a negative impact on every system of the body.  This may be why you may be experiencing such a vast array of symptoms, many of which may be related to a sub-functioning thyroid.

According to the Institute of Medicine, 59% of triiodothyronine (T3) and 65% of thyroxine (T4) are comprised of iodine.  Iodine is essential for the production of your thyroid hormones. Therefore, iodine is needed by every cell of the body in order to aid in the conversion of food into energy, in other words, your metabolic rate. In essence, a deficiency can lead to a sluggish metabolism, potentially explaining that “unexplained” weight gain, even though you’ve been dieting and exercising.

Iodine is essential for the production of your thyroid hormones.

The hormones of your thyroid also help to regulate body temperature, regulate blood glucose, and help your body to utilize stored fats and nutrients when energy is needed.  Without sufficient iodine, all of this would be compromised.

Adequate iodine is needed by pregnant women to ensure proper production of the thyroid hormones, which are required for the formation and growth of fetal organs and brain development. Children need iodine for the continued growth of brain and nerves.  A deficiency can cause delayed mental development, poor learning, and a weakened metabolism.

It’s also believed that iodine is a powerful antioxidant, removing free radicals from your cells, thus reducing risk of cancer.  It’s also antibacterial, antiparasitic and antiviral and can help with the eradication of intestinal infections.

Iodine deficiency is becoming epidemic.  It’s not coincidence that the Japanese consume almost 100 times more iodine than Americans do and have significantly lower incidences of chronic disease including thyroid disorders and cancer.  The US RDA for iodine is 150 mcg/day, whereas the average intake in Japan is 13,800 mcg/day.

Americans not only don’t consume the quantities of iodine rich foods that the Japanese do, like fish and sea veggies, but we’re constantly exposed to iodine antagonists, which not only strip iodine from our bodies, but block receptors preventing the uptake and utilization of iodine.

Prior to the 1960’s, iodine was used as a dough conditioner for making bread and other baked products.  Thinking that people would be consuming more than the RDA in iodine, US health authorities thought it would be a good idea to replace iodine with bromine.

Bromine is a member of the Halide group, and when ingested, displaces iodine.  Though it was outlawed by the government in 1975 for use in a particular digestive aid, forms of it are still being used today not only in bread, but personal care products, drinking water, Mountain Dew soda.  In the 90’s, bromine was banned in bread making in both the United Kingdom and Canada, but the United States still allows it.

Fluoride and chlorine, also members of the Halide family, are also iodine inhibitors.  In the 1950’s, fluoride was prescribed to patients to reduce thyroid activity.  So, logically, it makes sense to add it to toothpaste and anti-cavity treatments you receive at your dentist. It’s no wonder almost 30 million Americans have been diagnosed with hypothyroidism, not to mention the over 10 million who have not been diagnosed.

It’s no wonder almost 30 million Americans have been diagnosed with hypothyroidism.

Several studies have linked reduced T3 and increased TSH to fluoridated water in populations exposed to such water.  Other studies, dating back to over a century ago, have connected fluoride to goiter (enlargement of the thyroid gland).  Not surprising since the main cause of goiter is an iodine deficiency.

Chlorine, also part of this family, is another chemical compound inhibits iodine uptake, and is used everywhere, from municipal tap water, swimming pools, foods products like flour, sugars and artificial sweeteners, and bleach and sanitation products.

Combine an iodine deficient diet with all the iodine inhibitors you’re exposed to and there’s your near 40 million who suffer from thyroid disease in the US alone.  Iodine deficiency may be causing an epidemic of obesity, cancer, thyroid disease and intestinal dysbiosis, among other ailments.

Iodine deficiency may be causing an epidemic of obesity, cancer, thyroid disease

As mentioned earlier, iodine is required by every cell of the body, therefore, a deficiency of iodine can cause a vast array of symptoms, many of which are:

First and foremost, avoid all iodine antagonists as much as possible, like those mentioned above.  Yes, this means avoiding commercial baked products like that morning bagel, drinking only distilled, spring, or quality filtered water and passing on the insane fluoride treatments at your dentist’s office.

Use natural cleaning products in your home, like vinegar and baking soda and some other “safe” products you can find at a health food store like Whole Foods Market or Thrive Market. Avoid chlorinated bleach washing your whites, use hydrogen peroxide based bleaches.

Some fish and sea veggies are high in naturally occurring iodine, however, we recommend limiting your fish intake to only two to three times per week, as most contain a lot of toxins from the contaminated waters.

Adding iodine containing supplements like kelp can also be of benefit.  Kelp is fantastic as it contains, in addition to iodine, many other trace elements our bodies need.  Though all veggies from the sea contain some level of toxic metals, kelp is high in alginates, which help bind and remove the toxic metals from the veggie.

We do not recommend taking high doses of iodine supplementation, though many may benefit from it depending on the state of their thyroid, unless working with a qualified practitioner.